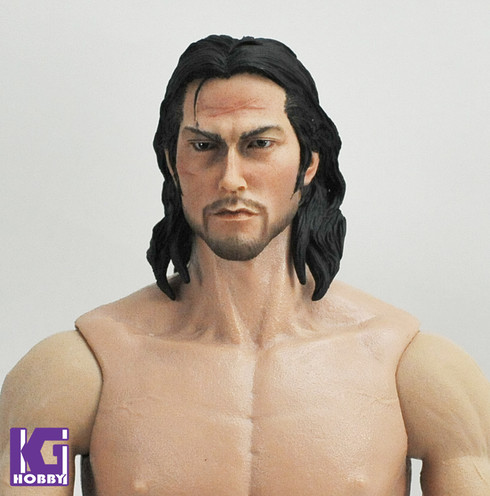 NEWLY painted version from June 2012, much better than previous version

Miyamoto Musashi (宮本 武蔵?, c. 1584 – June 13, 1645), also known asShinmen Takezō, Miyamoto Bennosuke or, by his Buddhist name,Niten Dōraku,[1] was a Japaneseswordsman and rōnin. Musashi, as he was often simply known, became renowned through stories of his excellent swordsmanship in numerous duels, even from a very young age. He was the founder of the Hyōhō Niten Ichi-ryū or Niten-ryū style of swordsmanship and the author of The Book of Five Rings (五輪書 Go Rin No Sho?), a book on strategy, tactics, and philosophy that is still studied today. Miyamoto Musashi is widely considered as a Kensei and one of the greatest warriors of all time

Already PRE-PAINTED as you see in the picture

There is hole in the neck, this will fit most 12" action figure body hot toys/enterbay

instock now and ready to ship!!