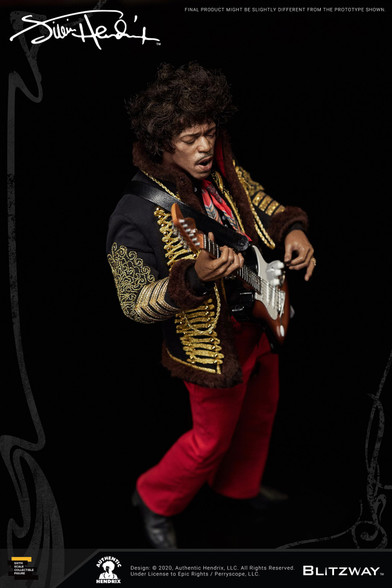 PRE ORDER PRICE  HKD2200/USD289
You will be charged a 20% Deposit
80% outstanding balance and shipping fees will be charged after the product is ready to ship
OR
you can make a full payment now with 3% discount
Please read our Pre-Order Policy before you made an purchase
By placing a pre order you are agreeing with our preorder condition
Pre order ETA:Q4 2020 ( please expect delay shipping from Blitzway)

“The greatest instrumentalist in the history of rock music.” “The deity amongst gods. Guitar god.”
“One of the most influential guitarists in history and one of the most creative musicians of the 20th century.”
Blitzway is proud to introduce the official 1:6 scale Jimi Hendrix action figure, a legendary musician who pioneered a new era of rock.
“All I’m gonna do is just go on and do what I feel.”
- Jimi Hendrix -
We wanted the figure of Jimi Hendrix, who played music passionately with more feeling and imagination than anyone else, to embody his philosophy that life and music are inseparable.
We captured the realistic appearance of his expressions for people to feel his free soul when he performed on stage.
We also realistically recreated the features that make him a unique left-handed guitarist and outfitted the figure exquisitely with his iconic attire.
In addition, we included accessories for you to set up his various stage performance poses.
“Shake my left hand, man, it's closer to my heart.”
- Jimi Hendrix -
His music is timeless and it lives, because he created it for the soul and mind, not for the charts.
We appreciate the gift that Jimi Hendrix has given us all with his short yet eminent four-year music career. Now assimilated with art, feel the soul of Jimi Hendrix right in front of you.
“With the power of soul, anything is possible.”
- Jimi Hendrix -

★ Production details might be subject to change without any prior notice.
★ Prototype shown, final product may be slightly different.