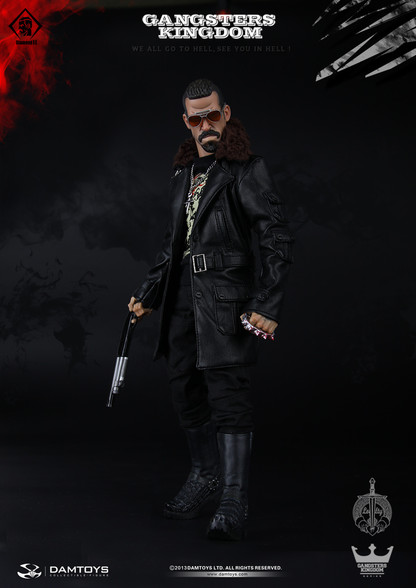 DAMTOYS 1/6 The Gangsters Kingdom Series - Diamond 2 GK005 The Turncoat
New series of Gangsters Kingdom with a great detailed body with tattoo
物竞天择，适者生存
which means "In natural selection, only the fittest could survive"
the figure comes with
1.Headsculp
2.Action bady
3.Black fur collar fur coats
4.Long sleeve black T-shirt
5.Black trousers
6.Black waist chain wallet
7.Knuckle Duster
8.High barrel boots（one pair）
9.shotgun
10.Fly knife x4
11.Leather wallet
12.The belt
13.Silver necklace
14.The left hand wristbands+Palm
15.The right hand wrist support+Palm
16.Palm （3）three
17.sunglasses
The Diamond family is the strongest and most ambitious one among the four gang families, its members includes Australians, Mexicans and Europeans.
Ambition and power is all you need to earn respect in this family. This is a family even the Hearts would fear, and its structure is about to change by the coming of a traitor.

Alger, the 2 of diamonds, is the key that changes the power pattern of the four families. He used to be the sidekick of the J of Spades. Alger’s father was a follower of Ogier’s father, the K of Spades, and earned his credits during the rising of Spade family. His father was very loyal to the K of spades, but as his position in the family rose, he eventually started to make plans for his own heir in the fear of nepotism in the family. He gave Alger hard training ever since he was a little child, so that Alger could assist the J of spades becoming the family successor in the coming years.

Since Alger was 6 years old, father taught him fighting techniques, and eventually sent him to China for martial arts training. Alger therefore became a fan of Chinese culture; he later had his arm tattooed in Chinese: in natural selection, only the fittest could survive.

Alger’s betrayal dated back to when he came back from China. He was 22 years old and already a combat master, not even J of spades could match him. After Alger came back to the family, he became J’s right-hand man, and J also saw Alger as his own brother. However, as time flows, human hearts changes too. Alger always expected J to inherit the family, but the Q sibling’s power were growing, the eventually J’s position in the family is threatened. Alger volunteered to sweep the obstacles, but J wouldn’t allow him to and chose to step back, this disappointed Alger. The seed of ambition in Alger’s heart started sprouting, he was unwilled to be merely a shadow behind J, he didn’t want to take his father’s path, and he felt that he would never get the respect and position that he deserved in the family.

If the disappointment in J was not the break point of Alger’s ambition and renegade, his father’s death was the last straw. The Q sibling’s trap lead to his father’s death, but J prohibited Alger’s revenge for the families’ joint interest. Alger was completely despair in the family, and in J. His ambition broke out at this point, his hatred speeded up the inflation of his ambition, and the flame of revenge in heart swallowed his humanity. But it was not easy to get rid of the Q siblings, he could carry on his own revenge only if he is powerful enough. Since the Spades family did not reserve a card for him, he chose to leave, to join a stronger family,

The K of diamonds always appreciated Alger, but he also had fear in Alger’s ambition, he only gave Alger a small card, the 2 of Diamonds. Alger was indifference with this; all he needed was a fair chance to earn all he needed with his fist. Thanks to his extraordinary combat skills, he quickly earned the trust of a few other cards in the jungle of diamond family; they were willing to follow him.

After several years of struggle, Alger raised the curtain of his comprehensive and enormous revenge plan…
Guards in the room soon become a bunch of sieves under the firepower 4 of spades and the others. 3 entered the room to check if there are any survivals, while 4 checked those drugs on the table, and signaled his men to move them away. Several spade gangsters started to move the drugs, 4 and 3 led the remaining men into other rooms. Entered a corridor and passed a pile of debris, with some muffled sound, two gangsters suddenly fall to the ground. At the very moment as 4 turned around, a dagger flied straight to his throat; he couldn’t dodge, all he could do in time was raising his arm as a shield. Before 4 was able to make any further move, a shadow flashed out, kicked right into his chest, and he flew several metres away. Heard the noise, 3 rushed to rescue and slashed the shadow with his axe, but was blocked by a pair of fist knuckles, power of the clashing almost dropped 3’s axe from his hands. 3’s combat skill was personally trained by J, yet he was knocked down after a few rounds, blood came pouring out from his mouth.

“You are a blot to the family”, 4 said, getting up from the ground, holding his dagger.

The shadow gradually revealed himself, he was the 2 of diamonds, traitor of the spades family.


方块2将自己的忠诚纹身修改掉后，更有变节者的味道，他的内心已经没了有忠诚二字。
2 of diamonds is almost flaunting his betrayal after he changed his “loyalty” tattoo. He no longer has any loyalty in his heart. 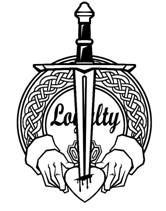 “Flame of revenge” tattooed on both sides of his head

阿尔杰在中国受到了很深的文化熏陶，他最喜欢就是这句，这句话也更代表他对人生态度。
Alger is deeply influenced by Chinese culture, this is his motto, and his attitude towards life.

太极：既是易，也就是地球诞生之前，作为宇宙生化本源的混然一体的元气一分为二“是生两仪”。轻清之气上浮 为天，重浊之气下凝为地，于是阴阳分，两极成。太极动而生阳，动极而静，静而生阴，静极复动。一动一静，互 为其根；分阴分阳，两仪立焉。阳变阴合而生水、火、木、金、土，五行顺布，四时行焉。五行一阴阳也，阴阳一 太极也，太极本无极也。二气交感，化生万物。万物生生而变化无穷。
阿尔杰将太极图案纹在自己的右手上，希望自己能够具有制衡阴阳的能力。
Alger tattooed the Tai Ji pattern on his right hand, hoping he could manage the power of balancing Yin and Yang.

On his left hand is a compass, wishing himself never get lost 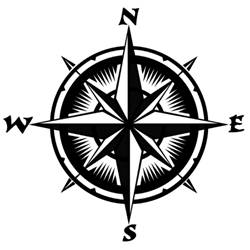