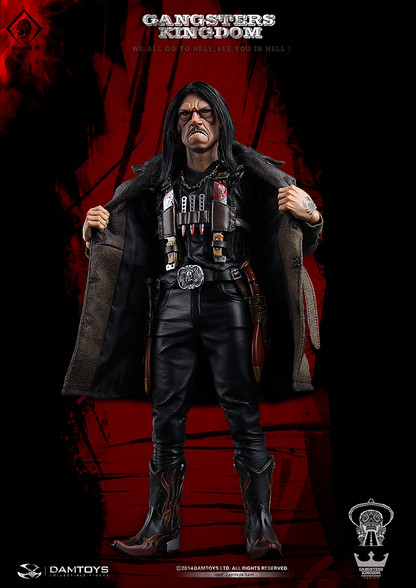 The 3 of diamonds, Juarez, is born in Mexico. He was the boss of the Scorpion family, before one man, “the mad dog” betrayed him and sent him behind bars. He got out of prison with the help of a little cash, but all the gang members loyal to him were already eliminated by the mad dog. Juarez no longer had his prestige, and with his own gang started hunting him, he chose to fight back. Juarez returned to the gang with eleven knives in his coat, left behind a bloodbath and mad dog hanging in his own intestines. This incident caused an earthquake in the underworld of Mexico, eventually several gangs jointed together wanting Juarez dead, left him no choice but smuggling into the United States. He joined the Diamond family, the K of Diamonds showed him enough appreciation, but only gave him a card of 3. This was good enough for the poor desperate Juarez. but he has not received any respect ever since. The 2 of Diamonds saw this opportunity; By his extraordinary fighting skill, he soon earned Juarez’s obedience. 2 got the loyalty of Juarez, as well as Juarez’s flying knife skill.

…The 3 of Spades got up from the ground, slashed his axe to the 2 of Diamonds, but was stopped by a silver flying knife stabbed on his wrist. A shadow emerged at the side of 2 of Diamonds, a pair of machete was drown. Pulled out the knife, 3 of Spades kept chopping with the axe, joined by the 4 of Spades with his dagger. Pair of Diamond 3’s machete were dancing in the air, 3 and 4 of Spades were unable to parry, just like they could not block the flow of water. The machetes chopped and slashed on their body, blood spattered out. The 3 and 4 of spades was soaked in red, lied on the ground, unable to get up on their foot.

“Gift to send a message to the spades family”, the 2 of Diamonds said, coldly,

“Whichever with the tattoo you prefer” ……