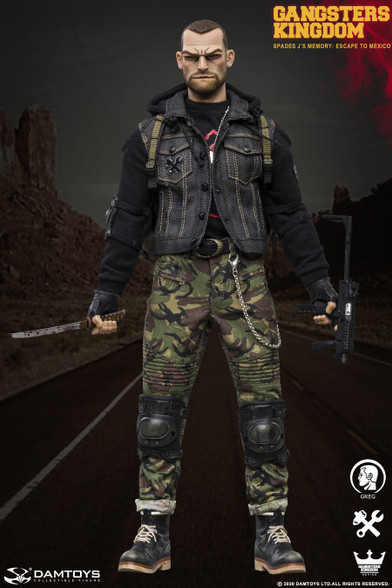 DAMTOYS GK003MX Gangsters Kingdom SPADES J’S MEMORY-GREG
PRE ORDER PRICE  HKD1450/USD190
80% outstanding balance and shipping fees will be charged after the product is ready to ship
OR
you can make a full payment now with 3% discount
Please read our Pre-Order Policy before you made an purchase
By placing a pre order you are agreeing with our preorder condition
PRE ORDER ETA: Q3 2020
DAMTOYS GK003MX Gangsters Kingdom SPADES J’S MEMORY-GREG
Spades J’s memory: Escape to Mexico
God Will Judge Our Enemies, and We'll Arrange The Meeting!
Greg once served in the special force, and then he spent a few years in the mercenary business with Ogier and Harry. Together they faced death on the battlefield, where&not;&not; Ogier saved Harry’s and Greg’s lives. Later, Harry followed Ogier into the Spades family and became the 7 of Spades, while Greg chose a different path and settled in Mexico with his Mexican wife, and organized a small moto gang called “the Tribe”. Ogier would pay a visit to Greg every time he stepped on Mexican soil.
Ogier is hunted by the Hearts family after he has killed little Billy, all the way into Mexico. Before crossing the border Ogier called Greg for help, as he has emptied his ammo cash, and there has been a long time since he last had anything to eat or drink. To summary, Ogier is not enjoying this situation. His beloved Jaguar E-Type rolls over the ever-stretching Mexican red soils, with two Land Rovers chasing her tail; Ogier hasn’t got much left to deal with this, with his concentration and stamina reaching the limits. After dodging another round of bullets, Ogier phones Greg again: it’s now or never.
Camera turns to inside a scoping sight, and on a rock above the top of a valley ahead of the red soil road lays a man behind a rifle, aiming right at Ogier.
“Never seen you buried under shit like this. How long since you last took a shower?” Says Greg, holding the rifle.
“I bring enough urine to give you a bath. Now cut the crap, when the hell are ya, see the two cars behind me? 6 blokes.”
“Rock 50 metres from the valley. Stop there, so you can release your ecstasy.” Greg replies with laughter.
“Promise me mate, don’t let’em interrupting my piss.” Ogier floors the gas and the Jag dashes into the valley.
Jag stops by a huge rock, and Ogier steps out of the car and begin to unleash his bladder, like a holiday road trip stop.

The two Land Rovers stop near Ogier. Men on the car choose to stay inside and observe Ogier’s move. “Bang”, front tyre of the first Rover is done. And “Bang!” goes the second one.
Finally finishing with his rather important business, Ogier zips up his trousers and turns around, and flashes his fingers, with both hands. The two Rovers tries to escape with flat tyres, but with two sounds of gun fire, both drivers are gone.
“There’s a backpack behind the rock for your own joy. Now I must take a fag.” Greg lights up a cigarette.
“Next time remember to leave me a pack.” Says Ogier, walking around the rock and picks up a submachinegun.
Ogier sticks a G18 into the back of his jeans, and starts pouring bullets to the Rovers with the machinegun.
“Bang” and “Bang”, the rifle talks again, persuading those who got off the Rovers not exposing themselves.
Ogier is not satisfied even after emptying a full magazine. He continues to spout his anger through the G18. When that magazine is finished, he tosses two grenades and then takes cover behind the rock.
Grenades roll under the two cars, and those men behind the Rovers spread and duck.
Two explosions sweep those men away.
“Two by the right on me, two left ones on you”, says Greg, aiming his sight at the legs of one running gunman.
Several shots fires, now Ogier has no one to chase. He turns to the other side and stares at the crippled enemies, “They’ll run away if you keep play.”
A roaring motorbike out of the valley cuts into the route of the running two. The rider took out a katana, and then the two crippled are fallen, forever.
The motorbike makes a U-turn and stops in front of Ogier.
Lifts the helmet visor only to unveil his evil smile, Greg says, “Welcome to Mexico.”
As helpless he could be, Ogier grabs the helmet Greg passed to him. “Thought you might take a few more blokes with you.”
“I just want some solitary hours with only you and me.”
Put on the helmet, Ogier sits unto the backseat of the motorbike; the bike trembles under his weight. “Haven’t finished with your bladder business, sir?” Greg turns around and asks.
“Yeah, too much guns”, Ogier pats on Greg’s backpack.
“Hoping to watch you finish’em all, but can’t help to join the parade.” Says Greg, while starting the Harley bike.
“How’s Maria?”
“At home. She’s preparing your favourite burrito with avocado, with honey beer.”
“Blimey. I’m fucking starving.”
Those two ride right into the setting sun.
part list:
HEADSCULPT
ACTION BODY
MOTORCYCLE DENIM JACKET
BLACK T-SHIRT
CAMOUFLAGE MOTORCYCLE PANTS
MULTIFUNCTIONAL BACKPACK
ELBOW PADS（A PAIR）
KNEELET（A PAIR）
GUN STORAGE PLATE x3
BLACK BELT
AR-7 SNIPER RIFLE
AR-7 (8 ROUNDS) MAGAZINE
AR-7 (15 ROUNDS)MAGAZINE
B&T MP9
B&T MP9 (15 ROUNDS) MAGAZINE
B&T MP9 (30 ROUNDS) MAGAZINE x3
G18 PISTOL
G18 PISTOL MAGAZINE x2
SAMURAI SWORD + SCABBARD
GRENADES x2
MOTORCYCLE HELMET
NECKLACE
CHAIN OF PANTS
MOTORCYCLE BOOTS（A PAIR）
GLOVES x5