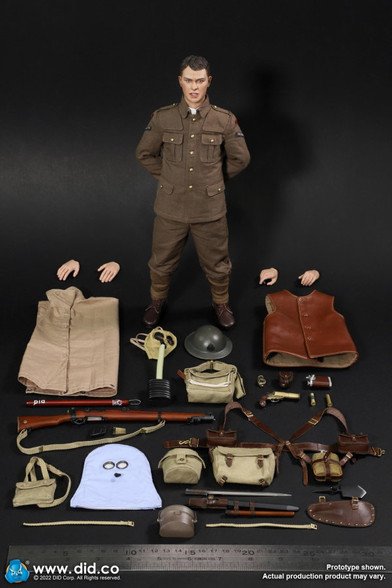 Archduke and Grand Duke Ferdinand, heirs to the Austro-Hungarian throne, and his wife, were assassinated on June 28 1914 by Bosnian Serb student, which led to Austria-Hungary declaring war on Serbia and the start of World War I. The Great war, in which 65 million people fought, 20 million were wounded, and more than 16 million died, was one of the most devastating wars in European history. It was not until November 1918, when Germany declared its surrender, that World War I came to an end.

Tom has a vivid and realistic headsculpt. He is frowning with open mouth and teeth. His eyes are full of anger, as if he would kill all his enemies at next moment.

Tom wears typical outfits of WWI British army, with MK1 Brodie helmet on the head, gray back shirt, brown uniform, trousers, jerkin and military cape on the body, and puttees and real-leather boots on the feet. There is even a mid-sleeve cotton one-piece suit to shape him better. The helmet inner liner is made of genuine leather and a metal badge is also on the helmet. The real-leather just makes the jerkin soft and comfortable. The military cape can be folded and secured by two straps. All outfits are beautifully-made and can be used in different scenarios.

Tom is equipped with an ALL NEW short magazine Lee-Enfield rifle. We recreated the rifle from the ground up to greatly improve the shape, structure and moving parts! The Lee-Enfield rifle demonstrated a strong combat capability during WWI. It is of great firepower, fast rate, long range and high accuracy. The 1907 pattern S.M.L.E bayonet can be connected to the rifle for attack. A flare pistol is included for communication.

There are loads of basic accessories like canteen, mess tin and haversack for Tom. Meanwhile, practical tools, such as the smoke PH Hood/P helmet, small box respirator, trench torch, marching compass and entrenching tool are also included. The compass case, entrenching tool carrier, canteen carrier and ammo pouches are made of genuine leather. All the accessories are carried on the real-leather P14 belt and shoulder straps. With such rich and various accessories, you could apply them in different scenarios as you wish and can even create a scene with Lance Corporal William and Colonel Mackenzie.

If you like the WWI series, you shouldn’t miss out Tom in your WWI collection.

PS: The other members of the WWI British Army and WWI diorama in the images are not included in B11013.