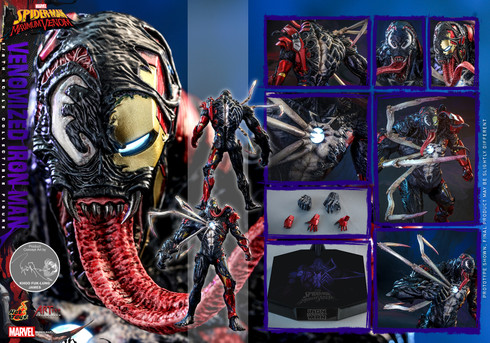 You will be charged a 20% Deposit
80% outstanding balance and shipping fees will be charged after the product is ready to ship
OR
you can make a full payment now with 3% discount
Please read our Pre-Order Policy before you made an purchase
By placing a pre order you are agreeing with our preorder condition
PRE ORDER ETA: Q4 2021 - Q1 2022

In this monumental collaboration, Hot Toys has invited Mr. Khoo Fuk-Lung, a popular and iconic Hong Kong comic artist to create his own distinctive style of Venomized Iron Man. His design offered an extensive insight into the re-imagined character through unique and incredible visual elements, greatly emphasizing the fine details on the Iron Man armor with powerful drawing attentions to the parasitic Venom symbiote; while Hong Kong sculptor Mr. Joseph Tsang has carefully translated the conceptualized design into a realistic collectible with exceptionally fine details.

Moreover, a Special Edition available in selected markets will include a symbiote sword that’s interchangeable onto the incredible figure, recreating the times when Venom turns his symbiote into a weapon.

-       One (1) newly developed head sculpt of half Venom and half Iron Man with LED light-up function on left eye (white light, battery operated)

-       Arms and legs are partially crafted with vinyl material

-       A specially designed character themed figure base with graphic card