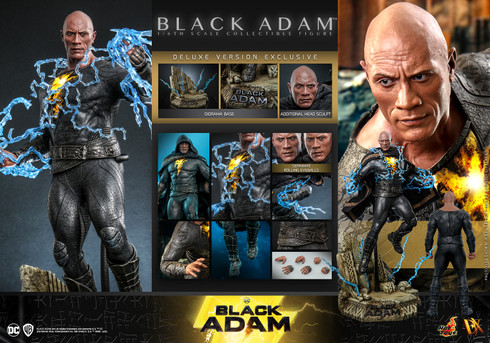 “I kneel before no one.” – Black Adam
In ancient Kahndaq, Teth Adam was bestowed the almighty powers of the gods. After using these powers for vengeance, he was imprisoned, becoming Black Adam. Nearly 5,000 years have passed and Black Adam has gone from man, to myth, to legend. Now released, his unique form of justice, born out of rage, is challenged by modern day heroes who form the Justice Society.
Ahead of his theatrical debut, Hot Toys presents Black Adam as 1/6th scale collectible figure (Deluxe Version) from DX series, offers a truly impressive diorama base and additional head sculpt bringing more display options for this character.

This Black Adam figure will unleash incredible power among your display!

*Prototype shown, final product may be slightly different
**Light up function operated using USB power
***USB connecting cable is not included for collectible, USB-C cable is required
****Luminous reflective effect can be activated by UV black light torch (not included)
*****Product details could be subjected to change without further notice

You will be charged a 20% Deposit
80% outstanding balance and Shipping will be charged after the product is ready to ship
OR
you can make a full payment now with 3% discount
Please read our Pre-Order Policy before you made an purchase
By placing a pre order you are agreeing with our preorder condition
PRE ORDER ETA: Q1 2024