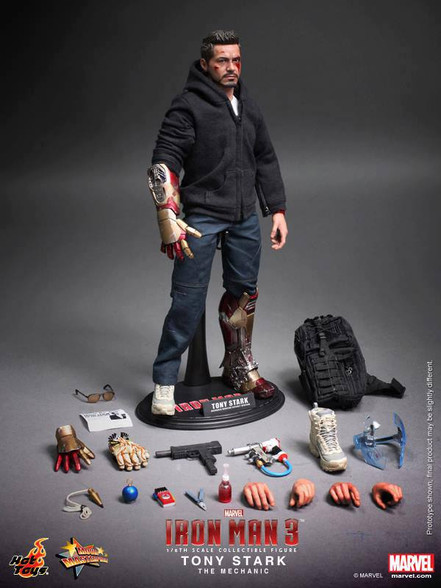 Tony Stark, the beloved hero and billionaire genius, faced some challenging issues in Iron Man 3. Terrorists badly injured his friend, destroyed his house, and kidnapped his girlfriend, but despite the downward spiral that he was in, Tony didn’t give up and was determined to take down The Mandarin.

Hot Toys is thrilled to introduce the Tony Stark (The Mechanic) Collectible Figurine after the exciting scene where Tony Stark creates homemade weapons to infiltrate The Mandarin’s mansion.

The movie-accurate Tony Stark Collectible Figurine is specially crafted based on the image of  Robert Downey Jr. as the genius billionaire Tony Stark in his battle damaged civilian attire in the movie, highlighting the newly developed head sculpt, an advanced body with light-up chest light and greatly detailed weapons and accessories.