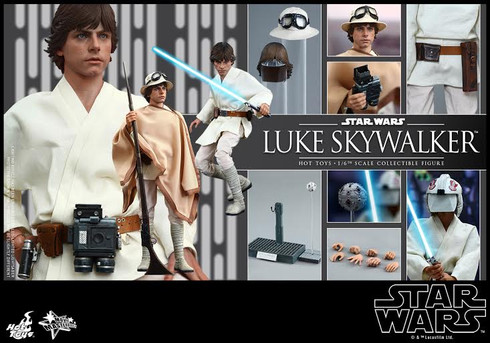 Originally just a moisture farmer on the planet Tatooine, the young Luke Skywalker’s life began to change forever when he purchased two droids, R2-D2 and C-3PO, and met the Jedi Master Obi-Wan Kenobi, the infamous smugglers Han Solo, Chewbacca, and Princess Leia! Luke’s actions helped change the fate of the galaxy by assisting the Rebel Alliance against the Galactic Empire and destroying the terrifying Death Star.

The movie-accurate collectible figure is specially crafted based on the image of Mark Hamill as Luke Skywalker in the film featuring a newly developed head sculpt, specially tailored costume, LED-lighted lightsaber, a hat with goggles, a poncho, detailed accessories, and a figure stand. A special edition is available in selected markets which include an additional Stormtrooper belt with grappling hook, a communicator, and a blaster rifle.

Your Star Wars collection wouldn’t be complete without this Luke Skywalker collectible figure.