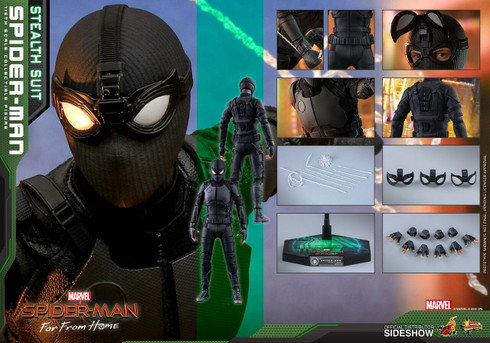 Spider-Man is coming back on the big screen for another exciting adventure! This time our friendly neighborhood super hero has decided to join his friends and the rest of the gang on a vacation to Europe, and leave the heroics at home to focus on his friendships. Inspired by the upcoming Spider-Man: Far From Home, Hot Toys is thrilled to officially present our latest movie masterpiece - 1/6th scale Spider-Man (Stealth Suit) Collectible Figure captures Spider-Man in his new black suit!

Meticulously crafted based on the appearance of Spider-Man’s appearance portrayed by Tom Holland in the movie, the figure features a newly developed masked head sculpt exposes part of his face with 3 pairs of interchangeable Spider-Man eye pieces to create numerous Spider-Man’s expressions, a Spider-Man Stealth Suit with fine details, multiple spider-web shooting effect parts and a movie-themed dynamic figure stand.

Expend your Marvel collection with this impressive Spider-Man figure!

-          Authentic and detailed likeness of Spider-Man in Spider-Man: Far From Home

-          A newly developed masked head sculpt exposes only the eyes, with three (3) pairs of interchangeable Spider-Man eye pieces that can create numerous combinations of Spider-Man’s expressions

-          Ten (10) pieces of interchangeable hands with black cobweb pattern including:

-          Six (6) strings of spider web in different shapes and lengths, attachable to the web-shooters

-          Dynamic figure stand with Spider-Man nameplate and the movie logo