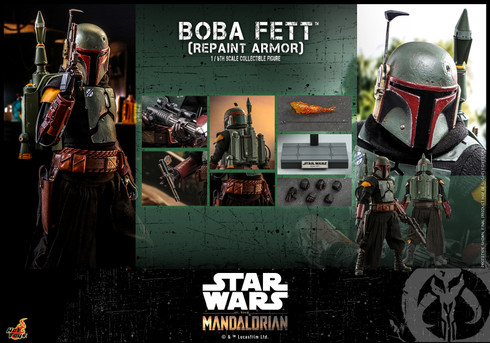 ~ Television Masterpiece Series ~
The legend is back! One of the most feared bounty hunter in the galaxy has excited Star WarsTM fans around the world when he returns in The MandalorianTM and cross paths with Din DjarinTM in order to reclaim the armor passed down to him by his father.

Today, Hot Toys is delighted to continue expanding The Mandalorian collectible series and present the 1/6th scale collectible figure of Boba Fett in his repainted armor seen in the highly acclaimed live-action series!

The figure features a meticulously crafted Mandalorian helmet and armor with exceptional paint applcation, Boba’s iconic jetpack, skillfully tailored outfit, a flamethrower effect, a fibercord whip, a blaster, a rifle, and display base!