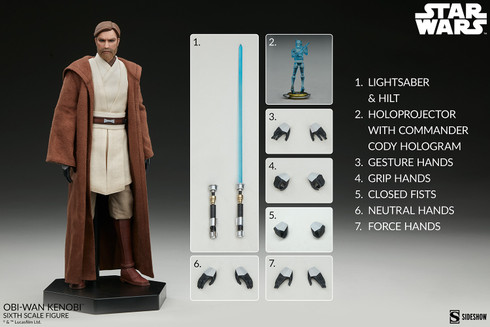 The Obi-Wan Kenobi Sixth Scale Figure captures the Jedi Knight’s distinct design from the fan-favorite animated series The Clone Wars, as he works to keep the galactic peace alongside the Jedi Order. This articulated figure features a stylized headsculpt and a carefully tailored fabric costume consisting of a Jedi robe, tunic, undershirt, tabards, pants, a sash, a belt with sculpted accessories, and sculpted boots and gauntlets to create his signature uniformed look.

The Obi-Wan Kenobi Sixth Scale Figure includes a number of stylized hands and swap-out accessories to give collectors a wide range of display options for the Jedi general. Obi-Wan Kenobi comes with four pairs of stylized hands including a pair of grip hands, a pair of neutral hands, a pair of force hands, and a pair of fists for a wide variety of gestures and pose combinations. In addition, he comes with both a lightsaber hilt and lightsaber with its blue tapered blade unleashed for battle action. Finally, Obi-Wan includes a holoprojector accessory with a sculpted Commander Cody™ hologram for communicating with the loyal Clone Trooper.

Obi-Wan Kenobi Headsculpt, as seen in The Clone Wars
Five (5) pairs of hands

PRE ORDER PRICE HKD1980/USD259
You will be charged a 20% Deposit
80% outstanding balance and shipping fees will be charged after the product is ready to ship
OR
you can make a full payment now with 3% discount
Please read our Pre-Order Policy before you made an purchase
By placing a pre order you are agreeing with our preorder condition
PRE ORDER ETA: Q1 2022