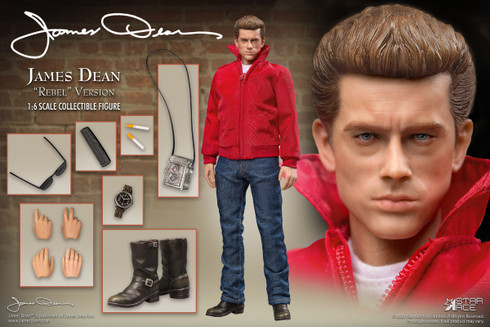 PRE ORDER PRICE  HKD1550 /USD202
You will be charged a 20% Deposit
80% outstanding balance and shipping fees will be charged after the product is ready to ship
OR
You can make a full payment with 3% discount
Please read the our Pre-Order Policy before you made an purchase.
By placing a pre order you are agreeing with our preorder condition
PRE ORDER ETA: Q4 2020

James Dean was an actor ahead of his time and his tragic death at age 24 cemented his reputation as a true Hollywood legend. He only made a handful of films, but in every one he stood out as one of the best performers of his generation.

Star Ace brings James Dean to life as a fully realized sixth scale figure dressed as a teen “Rebel” and  featuring a detailed and accurate likeness and dressed in his iconic red jacket, white T-shirt, black boots and jeans.   Accessories include sunglasses, a comb, cigarettes and a camera.

Don't miss your chance to add this James Dean figure to your collection!