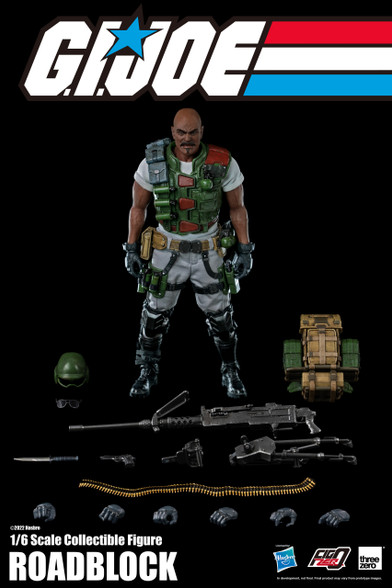 Threezero is proud to present the next character from the G.I. Joe team, Marvin Hinton, who is also known as Roadblock! He first debuted in 1984. With his size and brawn, Roadblock is the heavy machine gunner in the team who can carry a M2 browning machine gun!

Standing at approximately 12” (30 cm) tall, the G.I. Joe 1/6 Roadblock collectible figure features our standard fully-articulated body with realistic seamless arms, fabric hand-tailored costuming and a high attention to detail. It presents a highly-accurate likeness to the character as portrayed on G.I. Joe comics. It comes with a full loadout of weapons including a pistol with holster, knife with sheath, a M2 browning heavy machine gun, grenades, smoke grenades, tripod and bullets.

You will be charged a 20% Deposit
80% outstanding balance and Shipping will be charged after the product is ready to ship
OR
you can make a full payment now with 3% discount
Please read our Pre-Order Policy before you made an purchase
By placing a pre order you are agreeing with our preorder condition
PRE ORDER ETA: Q4 2022