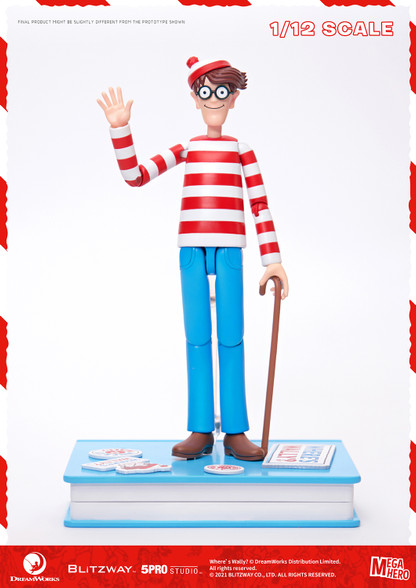 PRE ORDER PRICE  HKD760/USD99
80% outstanding balance and shipping fees will be charged after the product is ready to ship
OR
you can make a full payment now with 3% discount
Please read our Pre-Order Policy before you made an purchase
By placing a pre order you are agreeing with our preorder condition
Pre order ETA:Q3 2021 ( please expect delay shipping from Blitzway)
“Have you found Wally yet?”

Blitzway presents the Wally from ‘Where’s Wally?’, 1/12th scale MEGAHERO series.
Wally is an iconic character beloved by many fans since its debut as a children’s puzzle book called ‘Where’s Wally?’ in 1987.
Blitzway has taken the character from the book and brought him into the real world for all the ‘Where’s Wally?’ fans.
This 1/12th scale Wally action figure features the highly detailed Wally head sculpt, the newly designed body that allows for
Wally’s signature poses, and the DX version exclusive book-shaped base which also allows for the storage of accessories.
Do not miss this adorable Wally, and bring him home for your collection right now!