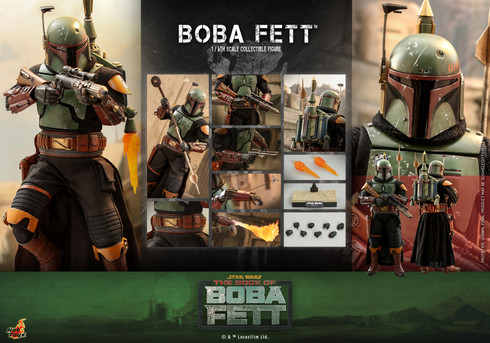 Having survived the SarlaccTM pit on TatooineTM, Boba Fett reclaimed his armor and took over the throne at Jabba’s PalaceTM. No longer just a hired gun, he reinvents himself on Tatooine alongside Fennec ShandTM to be respected leads to the people of Mos EspaTM.

This collectible figure features a newly developed Boba Fett helmet and armor, finely tailored under-suit, a jetpack, a blaster pistol, a blaster rifle, a gaffi stick, and a sand themed figure base!

Face off with the stranger from the desert with this new Boba Fett collectible figure!

-         One (1) pair of brownish red colored gauntlets with weathering effects

All prices are in JPY. © 2023 KGHobby Toys and Models Store. Sitemap | Shopping Cart Software by BigCommerce