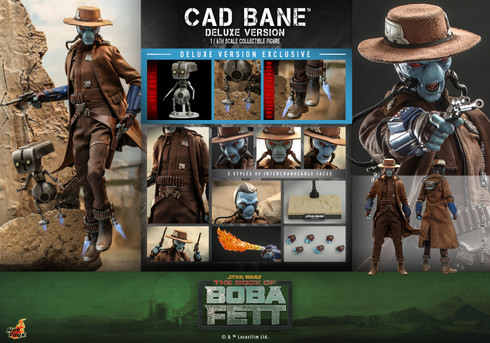 “Consider this my final lesson. Look out for yourself. Anything else is weakness.” – Cad Bane

Following his first live-action appearance in The Book of Boba Fett, Hot Toys is excited to present a Deluxe Version 1/6th scale collectible figure of the deadly Cad Bane!

This collectible figure features a newly developed head sculpt with amazing likeness, skillfully tailored hat and outfit, wired long coat, a pair of blaster pistols, a flamethrower effect, and a display base.

This Deluxe Version exclusively includes a pair of rocket thrusters for Cad Bane’s boots, and the bounty hunter’s techno-service droid Todo 360TM as seen in the Star Wars: The Clone WarsTManimated series.

Now it’s a great time to have this infamous bounty hunter in your Star Wars collection!

All prices are in NZD. © 2023 KGHobby Toys and Models Store. Sitemap | Shopping Cart Software by BigCommerce