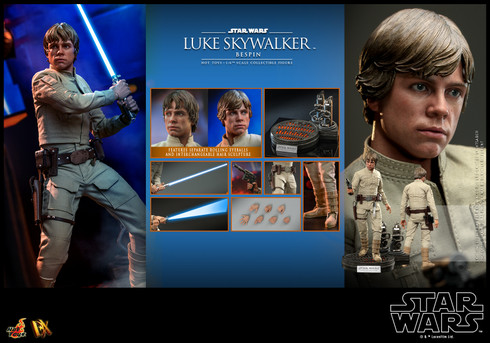 After seeing a vision of his friends in distress, Luke Skywalker is determined to save them despite cutting his training short against Jedi™ Master Yoda’s™ wishes. The young Skywalker raced to Cloud City on Bespin™ where Darth Vader™ awaited, hoping to capture Luke and bring him to the Emperor

The highly-accurate collectible figure is meticulously crafted based on Luke Skywalker’s appearance in the movie. It features a head sculpt with remarkable likeness and separate rolling eyeballs, two styles of interchangeable hair sculptures, finely tailored outfit, a LED light-up lightsaber, an interchangeable lightsaber blade emulating the weapon in motion, a blaster, and a carbon-freezing chamber themed base!

Don’t pass up on the opportunity to add this iconic Luke Skywalker collectible figure to your collection today.

-       Authentic and detailed likeness of Mark Hamill as Luke Skywalker in Star Wars: Episode V The Empire Strikes Back

-       Seven (7) pieces of interchangeable hands including: