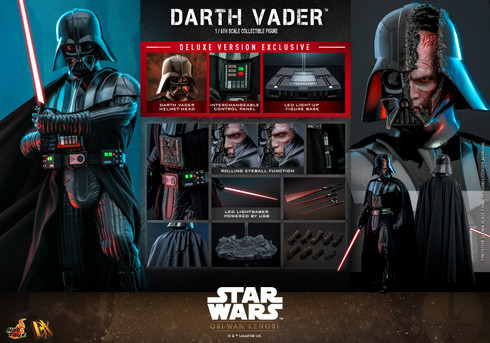 “Anakin is gone. I am what remains.” – Darth Vader

After being restored by his Darth SidiousTM following his brutal defeat by Obi-Wan KenobiTM on the fiery lava-world MustafarTM, Darth Vader is fully consumed by the dark side of the Force, leading the Empire’s eradication of the Jedi Order and hunting down his former master…

Today Hot Toys is delighted to present the next collectible of the Obi-Wan Kenobi live-action series with the new 1/6th scale Darth Vader collectible figure!

PRE ORDER PRICE  HKD2500/US326
You will be charged a 20% Deposit
80% outstanding balance and Shipping will be charged after the product is ready to ship
OR
you can make a full payment now with 3% discount
Please read our Pre-Order Policy before you made an purchase
By placing a pre order you are agreeing with our preorder condition
PRE ORDER ETA: Q4 2023 to Q1 2024

All prices are in NZD. © 2022 KGHobby Toys and Models Store. Sitemap | Shopping Cart Software by BigCommerce