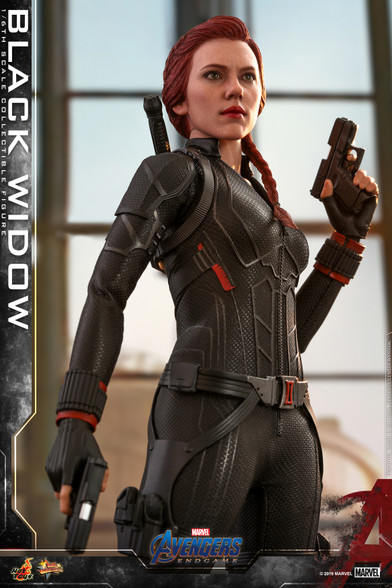 “This is going to work, Steve.” – Black Widow

After the events of Avengers: Infinity War, half of the population disappeared in the universe. As one of the most compelling characters in the Marvel Cinematic Universe, Black Widow’s hand-to-hand deadly combat skills are unmatched. Teaming up with Captain America, this master spy can’t quit at the moment, especially since the Avengers’ next mission appears to be an incredibly impossible one.

Tomorrow, Marvel Studios’ Avengers: Endgame will be arriving at worldwide theatres! Given unprecedented popularity of the character, Hot Toys is elated to present this talented assassin and founding member of the Avengers – Black Widow in 1/6th scale collectible figure!

Delicately crafted based on the appearance of Scarlett Johansson as Black Widow in the movie, the figure features a newly developed head sculpt with remarkable likeness and beautifully braided hair sculpture in her distinctive color, tactical battle suit styled with red markings, highly detailed weapons including articulated pistols, batons and a movie-themed figure stand with an interchangeable graphic card.

Display the Black Widow figure alongside with other Avengers: Endgame members! This will sure to be something that you do not want to miss!

-      One (1) black-colored belt with pistol holsters on thighs

-      A movie-themed figure stand with movie logo and character name

All prices are in NZD. © 2023 KGHobby Toys and Models Store. Sitemap | Shopping Cart Software by BigCommerce