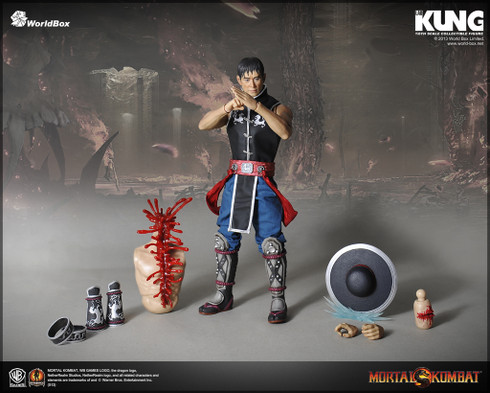 Kung Lao (Chinese: 空佬; pinyin: Kōnglăo) is a video game character from the Mortal Kombat series, introduced as a player character in Mortal Kombat II in 1993. He is a former Shaolin monk and a former member of the White Lotus Society who stands in the shadow of his great ancestor, the Great Kung Lao. Kung Lao is a close friend of the series' protagonist Liu Kangand together they were the main characters of the spin-off game Mortal Kombat: Shaolin Monks. He gained considerable popularity and favorable critical reception, in large part because of his famous weapon resembling Oddjob's hat.Sub-Zero is one of the most popular characters in the Mortal Kombat series. In one form or another, Sub-Zero has appeared in every generation of Mortal Kombat games as a playable character.

- One (1) pair of Upper arm protectors