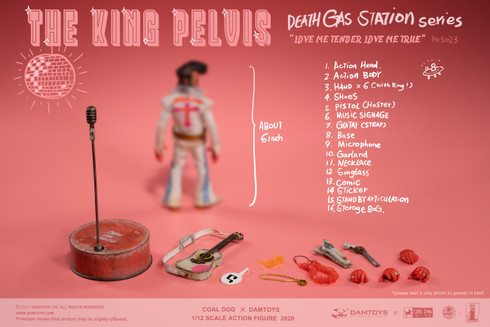 PRE ORDER PRICE  HKD900/USD117 free shipping to worldwide
20% deposit  and
80% outstanding balance and will be charged after the product is ready to ship
OR
you can make a full payment now with 3% discount
Please read our Pre-Order Policy before you made an purchase
By placing a pre order you are agreeing with our preorder condition
PRE ORDER ETA: Q4 2021
1/12 scale size! palm size action figure
it comes with a 1/12 body , outfits and all the accessories

The final version of the shoe has a subtle pearlescent color

In general, the idea is to use the character of King Pelvis to commemorate Elvis, a former superstar and a fantasy character full of immense achievement and controversy. So the design for him is more colorful and gorgeous than that of other characters of the gas station. On the premise of the production feasibility of such scale, we added many layers to enhance the sense of splendor without changing the style of gas stations. The print That's all right on the back of is also from a song important to E.

Other accessories are also redesigned to fit Elvis' personal preferences and understanding, such as the giant revolver flashy belt. But when I finished King Pelvis and went back to watch the video for E's lifetime, I realized that it was all just my imagination and that the real Elvis will always live on in the memories of every ardent fan.

Maybe this is what the death gas station looks like, pieces of memory jammed somewhere in the corner of the station with the tumbleweed on the barren earth. Nobody shows any interest in its origin.